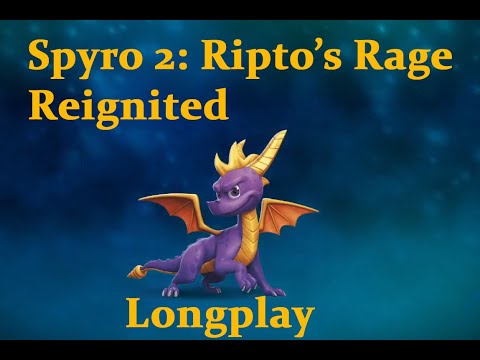 Hey everyone, it’s Kern here, back with another long-play from our YouTube channel. Today the name of the game is Spyro 2: Ripto’s Rage from the Reignited trilogy of games.

This trilogy is a remastering of the original Spyro trilogy developed by Insomniac Games. The original three games ran from the years 1998 to 2000. These games are platformers featuring the protagonist, Spyro. He’s a young purple dragon with a little bit of an attitude, and a flair for breathing fire, and flying around.… END_OF_DOCUMENT_TOKEN_TO_BE_REPLACED

As you may recall, we’ve already done the first game on our channel in a long-play format. As we last left our titular hero, he rescued his friends and reclaimed the dragon’s treasure, all while facing down the evil nemesis of the game, Gnasty Gnorc.

This time, we’re facing down new villains, with a new evil plot. Ripto, along with his two minions Crush and Gulp have decided to conquer Avalar. It’s our job to stop him. We’ll see how that goes.

Much like the first game, this one received quite the critical acclaim by gamers all around the world. This particular remake was released for the PlayStation 4 and the Xbox One on November 13, 2018. The PC and Nintendo Switch saw a release on September 3, 2019.

Spyro 2: Ripto’s Rage, is also known as Spyro 2: Gateway to Glimmer in Europe and Australia. The game was released in 1999. Like its predecessor, this is a platform title, developed by Insomniac Games and it was published by Sony Computer Entertainment for the PlayStation back in the day. This is the second game in the main series.

This game is kid friendly and therefore, great for young gamers. If you have a child that’s just starting out on platforming titles, this is a good game to pick. Spyro is the spunky dragon we all know and love, and the enemies are the goofy sort. You’ll find a lot of family fun here to go around.

You can help support us through PayPal or Patreon.

Meanwhile, check out some of our other great content below. You can also find more information about supporting us at the bottom of this post.