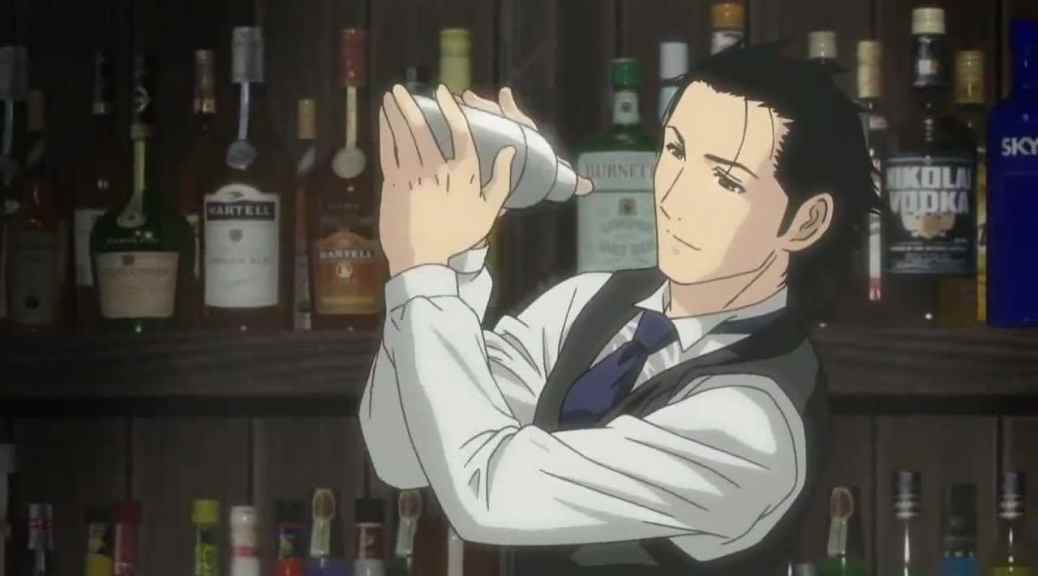 Before I begin this post, please understand that today I am reviewing an anime that contains a bar and the one thing that usually happens in bars. Namely drinking… lots of drinking… hence this warning up top…please do not ignore this warning.

I do not advocate additive and damaging behavior that sometimes revolves around drinking and drugs Therefore, if you are an alcoholic that struggles with sobriety, or you are easily triggered into wanting a drink based on the content you consume, please bypass this post. Sobriety is not always an easy thing to commit to, so every day sober is a day of victory.

You have now been warned. If you read beyond this point, you will be reading a review of Bartender an anime based around a bar and the lonely souls that wander in.

Please don’t forget to follow the blog. You can check out our platforms for great content too!

Bartender stands out as a refined slice-of-life series for older viewers. It isn’t your standard formula by far, and it doesn’t pretend to be.

It is soft and sophisticated without being obnoxious. Themes are sometimes vague, but not needlessly obtuse. Character stories are personal and often layered in simple but deep symbolism .Ideally a viewer would take the time to savor this series. It’s only eleven episodes long.

So, why do I give this show such high praise? Simple, I enjoy anime that doesn’t try to cram itself into the typical mold. Bartender stick out to me as an anime that doesn’t feel like an anime. It certainly is an anime, to be sure. Still, it lacks a lot of the mindless slapstick humor and overblown gags that make anime what it is.

Even anime aimed at older viewers can take a nosedive into childishness on occasion. While that can be fun, that can also get old fast. This series doesn’t do that. Bartender understands that it’s trying to cater to a more refined and thoughtful audience. That’s strictly what it does.

I highly suggest watching this series if you haven’t. There isn’t much conversation around this series, and since it’s a bit older it seems to have gotten buried under a flood of other anime over the years.

This is a crying shame to me, because Bartender is without a doubt a solid entry for an older viewer who doesn’t know what anime is, or may even be adverse to it. This is easily a gateway anime for someone over the age of twenty-five because it lacks many of the overblown tropes you often see in the medium.

It’s perfect for a viewer that has grown tired of the anime that continue clogging the typical seasonal line-up. Experienced anime fans may not have heard of this gem. Non-anime fans may be drawn to its down-to-earth representation of the characters and its story driven focus.

So with all of this said, let’s begin the review.

A Bar That Speaks to The Soul

Bartender first began as a manga in 2004, written by  Araki Joh and illustrated by Kenji Nagatomo. Now I won’t be speaking about the manga here, but as you can clearly see, written media is available for this series if you care to look for it.

Now, I will say this; the manga has clear story arcs. The anime is far more episodic in nature. Although it still contains vignettes about one or more of the characters, it doesn’t have as clear a structure or pacing as the written media.

There is also a live-action drama of Bartender that was released in 2010, but it is a bit harder to find. That said, if you’re trying to get someone who is completely opposed to anime and manga into the series, the live action is the perfect entry point.

The anime released in 2011, directed by Masaki Watanabe, and written by Yasuhiro Imagawa.

No matter what form you choose to enjoy the series in, the basic idea is still the same. There is a bar hidden deep in the alleys of the Ginza district. The bar’s name is Eden Hall. This quiet and lonely little bar is run by Ryuu Sasakura.

Ryuu is thought of as a bar-tending prodigy, widely acclaimed to the point his name precedes him. Rumor has it that he mixes the most incredible and prolific cocktails that anyone has ever tasted.

There’s just one little catch. The bar isn’t open to just anyone. Eden Hall chooses who happens to find it, and who enters its doors.

Customers from all walks of life and different backgrounds come into this bar seeking answers to life’s problems. Ryuu, being the prodigy he is, always knows the ideal cocktail to serve to his guests. This combined with his wisdom allows him to console and guide each afflicted soul that enters Eden Hall.

Knowing this, you can see how the series might come off as dry or bland in some places. You’d be right. It’s intended to be a soft-spoken series. Full of careful contemplation and a plenty of soul searching.

The entire series in wrapped up in wonderful animations and lovely music that can stand on its own merits. Even now, it stands the test of time, no question about that.

Number one, the themes may pose a problem. The general ethos of the anime can be thought of as problematic. The general idea is that the right drink, at the right time, is the perfect way to start an earnest inward conversation.

In other words, when a character drinks, they can find the answer to their problems within themselves. This frames the beverage as a looking-glass of sorts. I gave a warning above, but I’m going to cram it here too. If you have once had a drinking problem, or still do, please consider bypassing this show.

Each episode features cocktails that are made with love and care by Ryuu to serve to his guest. They’re poured, mixed, and served in a way that is pleasing to the eye. Given how tempting the animation makes these beverages look, a viewer may end up wanting something similar as well.

It’s very pretty to look at. The animation is stunning, but that’s both a bonus and a drawback when your talking about substances and ways to possibly abuse them.

Characters that come into the series are the sort that have baggage. They talk about their problems, they reflect on the issues at hand, and then have a drink over it. It’s not always portrayed as healthy, either.

The second issue is that it caters to a very specific type of viewer. It is calm, quiet, and methodical. If that isn’t the type of series you like, you’ll get bored fast. It is full to bursting with careful reflection and character stories that linger in subtle ways. That being said, this isn’t an anime about mind games, and there are no plot twists that leave your jaw hanging on the floor. That’s just not the sort of anime this is.

Bartender is without question one of the best anime you can find that isn’t on the beaten path. It’s stunning for its time visually, and each piece of music is just as carefully crafted as the series itself. A lot of love and care went into this show.

I find that Bartender is not necessarily for fans that want mystery and intrigue. Rather, the show is best suited to someone who enjoys a good character study without being mired down in endless drivel. Overall, due to the episodic nature of the series, no character lingers too long to outstay their welcome at Eden Hall. Ryuu is certainly entertaining on screen as well, rounding out each episode in a way I found fitting.

So, my conclusion is that you should watch the series if you can. Just be aware of the themes. Do yourself a favor and don’t try to binge it in one sitting. That doesn’t bode well. I’ve tried, and I love the series but even I can’t do it.

This has been Kernook of The Demented Ferrets…

With your contributions, you make our efforts possible. Thank you for supporting our content.

At the time of this post there are 3 notable contributors.

There are plenty of ways to support us. To find out more, click the button below.

One thought on “Anime Review- Bartender”