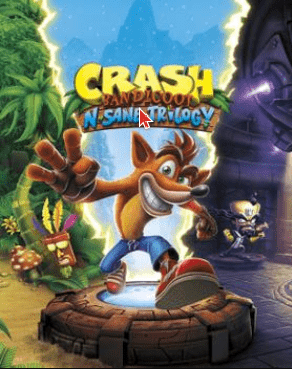 Hello everyone, it’s Kern here offering you up past live stream post. This is a game we recently completed over on our Twitch channel, and is now archived on our YouTube channel as well. Yep, that’s right! Kresh finally completed the first game in the Crash Bandicoot N. Sane Trilogy, a series of the first three remastered Crash Bandicoot games from the 90’s.

In the two videos below you’ll also hear me talking, as I’m on co-commentary on Saturday mornings when the live stream took place. You may recall that earlier this year, Kresh played and completed Crash Bandicoot 4:  It’s About Time on our Twitch channel. This prompted the decision to go back and play the first three games in the series.

The game has an absolutely infamous level that was so difficult in play-testing that they decided not to make it mandatory. You’ll see Kresh struggle against it quite a bit before true victory is achieved and the level is beaten.

This is the first game in the Crash Bandicoot N. Sane Trilogy being played Kresh. As usual, Kern sits in on co-commentary.

In the 90’s three dimensional platforming was still in its infancy. A few landmark titles had come out, but there was still many improvements to be made to the genre when it came to complicated and vast three dimensional environments. To be honest, developers were still trying to figure out the best way to design these sorts of games.

Crash Bandicoot is so widely loved by gamers because it managed to get right what so many other titles of the era got wrong. Originally developed by Naughty Dog and published by Sony Computer Entertainment the first game in the Crash Bandicoot series first released in September of 1996 for the PlayStation.

This 3-D platfomer is one of the most popular franchises to have ever released for the PlayStation. To this day it is considered by many to be a very difficult and fun game to play. Many adults have fond memories of playing the game as a child, and others have gone back to experience the game from a simpler time.

There’s a lot to like about the franchise. The titular character is zany, the villains are a bit wacky, and there is plenty of comedic relief to go around. A game suitable for children and adults alike, Crash Bandicoot has earned a rather die-hard fan following.

The franchise proved to be so successful in fact, that in June of 2017 the first three games in the series were released in a compilation title known as Crash Bandicoot N. Sane Trilogy for the PlayStation 4.

A year later, Switch, Xbox One and PC gamers would have access to the game as well, holding a wide consumer audience and massive sales once more.

With upgraded graphics, and overall faithfulness to the original releases, not much has changed. If you want to experience the original game this rendition serves you well. Though the jump mechanic feels a little different for sure, something Kresh comments on during gameplay.

Game Mechanics, Crates, and Other Crap

Crash Bandicoot is a platformer, so you know the drill. You can jump, run, and all that other fun stuff. You also have two main ways of dealing with enemies. You can jump onto enemies, or you can do a spinning attack that will send enemies bouncing out of the way.

Boss battles often have their own set of rules, but the idea is usually the same. Weaken the boss in same way, then attack them. Do this a number of times, the boss goes down.

To win against “Ripper Roo” for example, you need to have him blow himself up on those flowing TNT crates. After he does, you’ll be able to jump on him and take down his health bar.

In each of the levels you’ll find different kinds of crates. This is a core feature, there is a ton of these things and some of these are actually pretty deadly, so there are ones you won’t want to break. Crates can be broken open by jumping on them, using a spin attack, or knocking an enemy into them.

Most crates will only contain “Wumpa Fruit”, a fictional fruit that can grant the titular character Crash an extra lives. You’ll receive one life per one-hundred fruit.

Basically if you’ve ever played a Mario game, “Wumpa Fruit” take the place of coins. There are occasionally power-ups inside the boxes as well. Some crates will display an icon of what they have inside. Crates displaying Aku Aku’s face on them will give you a mask that protects Crash from a single enemy or certain traps in the level.

If you manage to collect three masks consecutively without taking a hit (yeah, good luck with that if you’re not a pro at the game) Crash will get a temporary invulnerability from all minor threats in the level.

Crates marked with a “C” act as checkpoints, your absolute best friend. Crash will begin at a checkpoint after losing a life, so long as you haven’t gotten a “game over”.

Then there are metallic crates marked with an exclamation point. These cause something to change in the area. Usually this just spawns more boxes, but sometimes you need those things so it is best not to ignore them.

Now onto the more dangerous crates. Jumping on a red TNT crate triggers a timer that culminates in an explosion. Spinning into these causes an immediate detonation, so yeah be careful around these ones. You need to blow them up for the box counter, but do so carefully.

Thankfully, there is no “Nitro” in this game to worry about, as that didn’t make an appearance until the second game in the series.

In the Crash Bandicoot N. Sane Trilogy a few changes were made. Crash’s jump has changed slightly, and returning players often comment on needing to get used to it. Kresh certainly does in the footage above. That’s not the only overhaul in the game either. There’s been a lot of “quality of life” improvements to be found.

Notably updated pause menus and save systems have been included. Time trials which didn’t show up in the series until the third game, now show up across all three games in this remastered version. Furthermore since this is a remastered rendition of the first three titles, game audio and cut-scenes have been updated. New recordings of the in-game dialogue was re-recorded by recent voice actors in the industry.

Well, those are the basics. By now you can determine for yourself if you want to play the game or not. With the gameplay footage above you can at least watch Kresh play the game if nothing else. So, that about does it.

Don’t forget to follow the blog for more content like this. Want to help keep the blog advertisement free? Please become a patron! We have a $1 “Little Ferret” tier that’s perfect for blog readers.

As a “Little Ferret” you will be allowed to help decide topics for the blog, and have access to patron only updates. Your name will be credited on every post for as long as you are a patron. This will also get you access into The Demented Ferrets official discord server. Join here today!

What did you think of the game? Let us know in the comments below. I always reply to comments, and so will Kresh if the need arises, so be sure to leave one if you want to.

This has been Kernook of “The Demented Ferrets”, where stupidity is at its finest and level grinds are par for the course. If you liked this content, please be sure to check out more like it below.