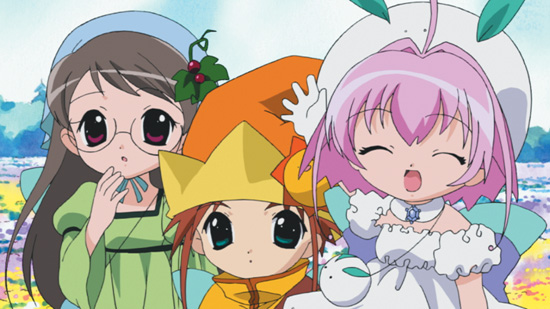 Hey all, this is Kernook here. Today we’re going to talk about a series that’s gentle and easy to watch. However, it’s not all sunshine and rainbows either. Sometimes this anime is a little bitter-sweet and contemplative above all else. While it touches on the subject of loss, you’ll find the themes to be easily digestible and never too dark.

Today I’m talking about A Little Snow Fairy Sugar. Please don’t forget to follow this blog and out social media for more content.

Before I dive into the series, let’s talk about the usual technicalities. As of right now the series can be hard to find. You can rent or buy it digitally on Amazon Prime. I’m not sure if you can locate it anywhere else. I still have my old DVD copies so that’s how I watch the show.

Speaking of that, the series was originally released on DVD in North America by Geneon Entertainment.  Sentai Filmworks partook the license later on. The animation was done by J.C. Staff, for better and for worse. For the time it was pretty decent, average at the very least. That said, it hasn’t aged well.

Thankfully, the character designs by Koge-Donbo save this problem. The characters are wonderful. Let’s dive into the meat of the show properly.

This is a short 24 episode series, centering around the main protagonist, Saga. She’s an interesting girl. She likes to have everything organized to perfection. To some degree her this nearly obsessive character flaw stems from hardship, but I’ll get to that later. Saga lives with her grandmother in Muhlenberg, Germany.

Side note: As far as I can tell, this is a fictional place. It isn’t real. Although interestingly enough, there was actually a man by the name of Frederick Muhlenberg. If what the urban legend says is true, then that is the guy who prevented German from becoming an official language of the United States. This is the sort of thing you find while researching for blog posts, I swear. Tangential learning, everyone! Anyway, I digress.

At the time the series begins, Saga is 11 years old. She goes to school and keeps a part-time job at the “Little Me” coffee shop. As a hobby she visits the local music store to practice playing her late mother’s piano.

As you can see, Saga’s life is entirely ordinary with nothing out of place. One day during a rain storm, Saga encounters Sugar, an apprentice Season Fairy. As you can guess, everything neat and orderly in Saga’s life goes completely askew as soon as she meets Sugar.

The seasons and weather such as snow, wind, rain and the sun are controlled by these little creatures. Also as expected, we find out that these little buggers are entirely invisible to humans. Saga can see Sugar. That is the crux of the show. The next thing Saga knows, she’s befriended the adorable little pain-in-the-butt. The general story goes like this…

In order for Sugar to become a full-fledged Season Fairy, as an apprentice she must first journey to the human world. These little fairies have a lot to learn during training. Naturally this causes problems for Saga as she tries to keep the little snow fairy out of trouble.

A Little Snow Fairy Sugar is full of simple everyday adventures, nothing more, nothing less. All in all, this show is light and airy. It’s a breath of fresh air, really… however there’s a few sad little elements too. Beneath the overtones of gentleness and spunky characters, the series has a very clear and honest tone.

You see, ultimately this is a story about life and loss. Growing up can be awkward and painful. This show speaks to that in a very real way. Really, the themes are about letting go of the past. The sincere friends and beloved family that we inevitably and tragically lose can’t put our lives at a standstill. We don’t get the time back after those emotional ties are gone, but we have to move on.

In this way, you might say A Little Snow Fairy Sugar is very similar to Sweetness and Lightning.

Although the series never beats you over the head with this concept, it is a pervasive theme. A Little Snow Fairy Sugar heavily and constantly implies that Saga can see Sugar because of her own childhood traumas. This is concept lampshades further due to the memory of Saga’s deceased mother.

Saga’s constant recollections of the woman speaks volumes. In some facets this is her journey of personal catharsis after grief.

Saga needs to learn to move on with her life. The show makes it clear. Every week, she visits her mother’s old piano. To her, this is the replacement for a gravestone. As I said above, she is an obsessive type character. Her routine visits are deeply tied to her emotionally.

There comes a time when Sugar finally discovers what she needs to know. That’s it, her training is done. She can go back home, if she only wanted to. She doesn’t want to return to the fairy realm. If she did that, it would mean leaving Saga behind forever.

This is a wonderful series, and it certainly is worth your time. The series is certainly aimed at a slightly younger audience. Adults may not get the same sort of benefit or enjoyment from the series. A middling or younger teenager would likely benefit best. That being said, the series is kid friendly and that makes for wonderful family viewing.

If you’re an adult anime fan that requires anime appropriate for small children around, this is reasonable viewing. Honestly, if you like these kinds of stories, the series will probably be a solid choice for you regardless of age.

Importantly though, it won’t offend the sensibilities of small children and it won’t be so absolutely annoying that older kids flat out hate it. It’s certainly aimed at girls more than boys. That being said, I know a lot of boys who do like it, so don’t let that stop you.