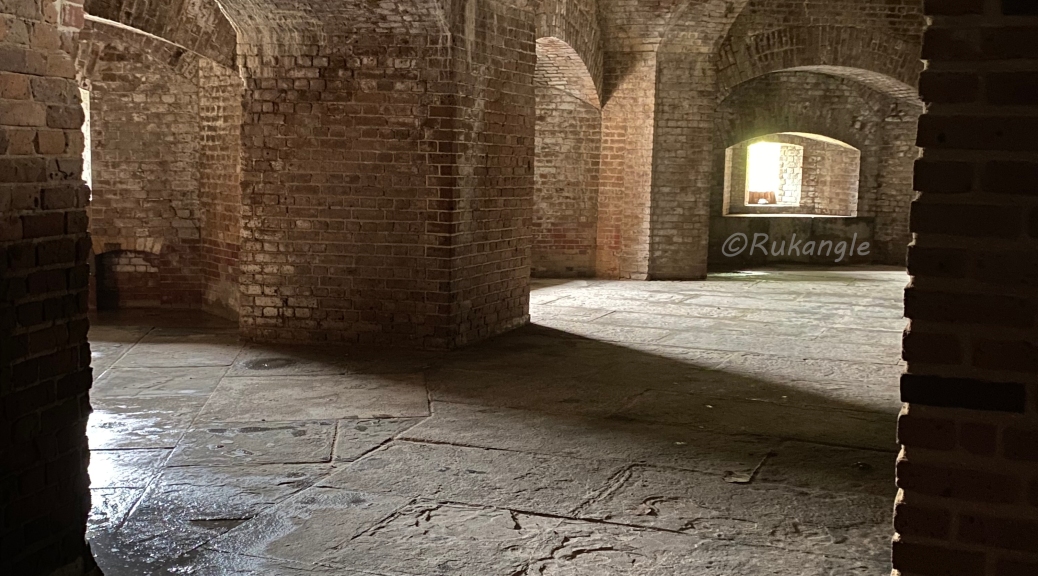 Hello everyone! It’s Demented Ferrets resident artist, Ruka. Welcome back to another “Universal Language of Art”

Today I will be talking a little about the history and the story behind this picture and why it’s so captivating to me.

This picture was taken at Fort Zachary Taylor located in Florida’s Key West Historic State Park. The fort was completed in 1866, taking 21 years to complete. The fort’s foundation consists of oolitic limestone and New England granite. Its five-foot-thick walls rose 50 feet above mean low water, and included two tiers of casemates plus a terreplein or barbette at the top.

There are three seaward curtains, 495 feet between bastions, each containing 42 guns on three levels. Each of them were augmented by a land-facing gorge. The troop barracks were built into this gorge with a capacity for up to 800 men. At either end of the barracks was a large gunpowder magazine while a Sallyport was located in the center, connected to land by a 1200-foot causeway. Rainwater was collected in underground cisterns along the perimeter of the fort.

It served as a deterrent for confederacy ships during the Civil War of the United States and was a stronghold in the Spanish-American War in 1898. Today, the forts hold a large variety of preserved weapons and have the largest collection of Civil War cannons in the United States.

Now, I am currently trying to get my B.A in History. When I think about what makes me want to study something that for many would-be considered boring, it comes down to my love for people, art, and architecture that really brings it all together.

Learning the stories behind places and the reasons why they still stand is a psychological part of its people. What it was and how it has evolved through the years, is also part of that wider culture.

This fort also brought back memories of my childhood, and they have nothing to do with this particular fort. Rather, they have to do with the one on a small island in the Caribbean. That one is called San Felipe del Morro Castle, located in San Juan, Puerto Rico.

Now I’m not here to give you all a history lesson or anything like that but places like these really make me want to just let go and explore its wonders with childlike eyes and a need to understand what happened there and how it still stands. (Of course, they would give yearly maintenance and all that. )

Yet with this fort, there was an interesting play of lights and shadows. Every corner was a play of what could be behind this archway, would it be more beams of lights or would it be more shadows? This play created some confusion but for an artist, it was a great source of contrasting lights. If you look closely we can distinguish each path and this includes the ceiling. It shows you how the support columns and ceiling round themself to make a tunnel-like structure to be able to support the artillery and all the men that were responsible for its defense. In a way, it can get a bit creepy and I do have another photograph that shows a darker side of the fort where it’s colder and there was almost no light coming thru.

It was a good time and we had fun exploring, learning, taking pictures, and having a piece of the ceiling fall on me while taking a picture, witnessed by multiple people, to me was a testament to how old the place was really is. And could you imagine, that dressing up as a pirate and running around the fort while being chased by confederate soldiers would be amusing, would it not? So, if you guys have any questions comments, or concerns, please don’t hesitate to leave me a comment below.

Well like always, this has been Ruka of The Demented Ferrets, where stupidity is at its finest, and level grinds are par for the course. I’ll see you around! Until then please be sure to check out our other content below.